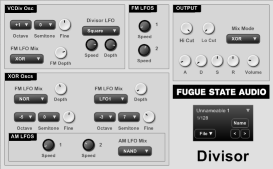 This is a noise compilation of sorts I took part in, organized by The Network Of Individualized Sonic Extremism. The reason I say “of sorts” is because, rather than containing a bunch of individual tracks from various artists, it consists of one 15-minute track containing layers from each participant. Each artist contributed 3 minutes of audio, which could be spread across the 15-minute timeline however you wished. The other artists who contributed are Digestion Machine, Monskor, Teuthis Galore, Radioactive Wastelands, Nygatoria, SPACEGHOST, and The Dreaming Corpse.

Contains remixes of tracks from past SC releases, plus a few previously unreleased tracks. Two of these tracks (debase and downcycle) come from deep in the vaults, around 1998.

The source material used on all 3 of these tracks was the last recording made on my old PC before it died. It was a short bit of knob-tweaking from one of my DIY machines, which has been timestretched, cut up, and otherwise mangled into an EP-length collection of drones and noise.

Both of these are available as pay-what-you-want digital releases in multiple formats from the SC bandcamp page.

I’ve re-posted some of the schematics, samples, and plugins previously available from the old “synthgeek pages” site. See the links in the top menu. More stuff coming in the next few days. There will be new stuff coming soon also, so stay tuned!

Welcome to the new Fugue State Audio website. Nothing here yet, please check out my SoundCloud page:

Music from my various projects and noise from my DIY devices.